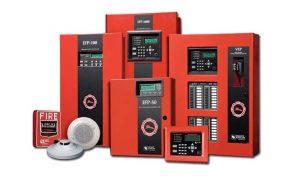 Like most fire alarms, the earliest St. Louis fire alarm systems can be dated back to the invention of the electric alarm in 1890. The man responsible was called Francis Upton and a known acquaintance of that other familiar inventor, Thomas Edison.

It wasn’t until 1902 that we’d see any more great advances to the technology. In this year, a British inventor created Europe’s first electrical heat detection system (one of the oldest incarnations of the modern fire alarm). This man was called George Darby and he wasn’t the only one trying to invent a potentially lifesaving detection device.

In the latter half of the thirties, a Swiss scientist called Walter Jaeger was hard at work on a detector for poison gas. Using a specially built sensor, he attempted to create a device which produced an electric current when poisonous gas bonded to an ionized substance. This current would be the alarm, the warning signal to tell people toxic gas was present.

Unfortunately, the experiment didn’t work. There was no bond and, therefore, no alarm. Yet, what did happen proved fortuitous for not just St. Louis fire alarm systems but fire alarm technologies around the world.

Jaeger, quite unintentionally, had affected the device’s sensor with smoke from his cigarette. There was an immediate change to the electrical current which registered as an alarm or warning. Jaeger had invented the electric smoke alarm.

After this point, progress was slow-moving. It wasn’t until 1951 that the first smoke detectors with ionization technology appeared in American workplaces. For many years, the only place they could be found was large scale industrial centers and commercial spaces such as warehouses. These early smoke alarms were expensive to produce and, thus, only placed in areas of extremely high value with a risk of fire.

The first domestic fire alarms (including heat detection technologies) appeared on shelves in 1955. However, these were a basic version of the more sophisticated ionization alarms and, within a decade, smoke detecting alarms would become a must-have device for homes and businesses. Duane Pearsall, one of the country’s earliest entrepreneurs, invented the first battery-powered smoke alarm for home use in 1965.

Pearsall’s domestic device was called the Smoke Gard 700. It was constructed out of extremely robust fire-resistant steel to ensure continued operation even if caught in a large scale blaze. After a number of studies confirmed the superiority of smoke detecting technologies over heat-based (or fire) detectors, the Smoke Gard 700 and devices like it started to be mass-produced for the home market.

The first popular single-station smoke alarm to hit the market and sell in large quantities was introduced in 1971. Like the early devices which preceded it, this alarm contained an ion-sensitive sensor. It also came with a 9-volt battery which could be easily removed and replaced. The independent alarm (unconnected to any other device) cost around $125 and sold at a rate of hundreds of thousands for several years.

In 1976, this precursor to modern St. Louis fire alarm systems was usurped by a smaller, cheaper and safer rival. The fast-paced evolution of solid-state electronics, particularly between the years of 1971 and 1975, meant alarms no longer needed cold cathode technologies. They could be made significantly smaller, for less money and with fewer complex parts for homeowners to maintain.

Suddenly, smoke alarms could be built with much smaller sensors. These compact sensors were more powerful so they could detect danger in significantly smaller amounts of smoke and other substances. Also, the integrated alarm components were replaced with smaller, more optimized versions which were compatible with cheaper, readily available batteries rather than the previous specialty ones.

Getting to Grips with Ionization Detectors – The Basics

To successfully detect smoke, an alarm needs to contain a particular kind of isotype substance. Most alarms use americium-241. This bonds with smoke molecules detected in the air. If enough bonds are created, an alarm is tripped, and a loud noise is emitted as a warning to those nearby.

There are two ionization cavities in a modern smoke alarm. The first is exposed to the atmosphere in whatever space it sits in. The second is a reference cavity and this is sealed off to atmospheric particles. Both ionization cavities contain particles emitted by the americium-24 (the radioactive isotope). This creates a precise amount of ionization within the cavities which, if altered, can trip the sensor and cause an alarm to sound.

In simple terms, the presence of smoke changes the temperature and air pressure inside the exposed cavity. When it is no longer comparable to the sealed (or reference cavity), the presence of potentially dangerous smoke – and fire – gets identified as a threat. It is this discrepancy between the two cavities, which only occurs when smoke alters their makeup, that is the detectable sign of an atmospheric threat.

In a modern smoke alarm, there is also an inbuilt warning system for the battery. When the battery power decreases to a specified level, a similar (but artificial) change in the ionization cavity is forced. As with a genuine detection, the alarm sounds to warn nearby users of a problem or potential danger.